Looking for a removalist in Richmond?

Moves have removalists in all subburbs of Melbourne and we know Richmond well. 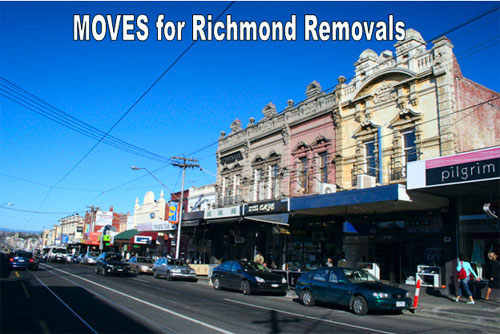 Richmond is a suburb in Melbourne, Victoria located 2 km south-east from Melbourne’s central business district. It was named after Richmond Hill, London, with its outlook of the river bend (Yarra), however the waterfront area was later named Cremorne. Richmond’s local government area is the City of Yarra.

The suburb is well known for its textile industry history and popular factory outlets centered along Bridge Road which remains an attraction to the area. Aside from being a lively retail sector and a shrinking industrial and manufacturing base, Richmond has some of Melbourne’s best examples of residential architecture from most periods. The suburb contains a selective mix of expensively converted warehouse residences, public housing, high-rise flats and Victorian-era terrace houses.

Richmond is also home to Nine Network studios(GTV-9) and the Richmond Football Club, an Australian rules football club which is a member of the Australian Football League.