Looking for a removalist in South Yarra?

Moves have removalists in all subburbs of Melbourne and we know South Yarra well. 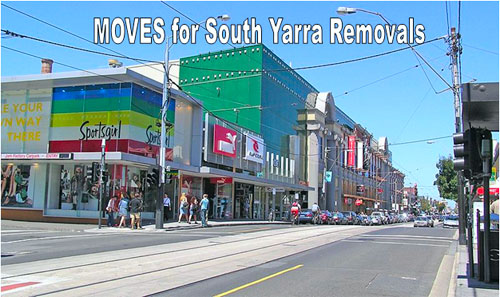 Toorak Road and Chapel Street are the main scene for trendy shopping, restaurants, nightclubs and cafe culture. The suburb has several local attractions, Chapel Street being the most popular one. In South Yarra you will also find Melbourne’s most popular and historic fresh produce markets, The Prahran Market.

South Yarra has some well known parks and gardens including part of the Royal Botanic Gardens, Fawkner Park, Commercial Road and Toorak Road (featuring recreational facilities and grand avenues of trees) and smaller gardens such as the former Greville Botanic Gardens, Como Gardens and the open space public housing.

Melbourne High School is located in South Yarra, and the 1930s Gothic main building is a local landmark.